Wajid Ali Shah was the fifth king of Awadh, a princely state in pre- independent India. He was known for his fairy tale palace, patronage of arts, 350 wives, menagerie of tigers and elephants and of course for his royal kitchens.He was an imperial who hand created his own calender. The gourmet cooks of Awadh invented the art of cooking over slow fire. The ambrosial  Awadhi cuisine  consisted of elaborate dishes such as kebabs, kormas, biryanis, exotic breads like warqi paratha, sheermal, naan and delicious desserts which are still popular and relished by people not only in Awadh but also globally.

Murgh Wajid Ali is one of the lesser found recipes from the majestic kitchen. Murgh means chicken.Boneless chicken breasts are flattened and stuffed with khoa ( similar to ricotta cheese )baked and simmered in an aromatic and flavorful gravy. If you get this right I can assure you, you will forget the butter chicken or any other chicken curry. The flavors are delicate ,delectable and easy on the palate.

Before I share the recipe, I would like to thank my family and friends who have been supportive of this blog and have in their own ways kept me motivated. This recipe requires me to mention my brother-in law, anesthesiologist at a leading hospital, who is a fine connoisseur of food, having tasted cuisines from across the world. He has been kind enough to send me information and reading material for the blog when he came to know I was trying this and some other dishes from the Awadhi cuisine.

If you want to feel like a king or a queen for a day, get some one to make this dish , set a royal table layout…and if possible serve it to you with hot flat breads or flavored rice and with all due splendour 🙂

Marinate the chicken with the rest of the ingredients for 15-20 minutes.

Mix all the ingredients together and divide into four portions. Spoon one portion on each chicken breast and make a tight roll. Spray a baking sheet with some oil and arrange the stuffed chicken on it. Brush with some oil and cook in the oven at 300º F till done. It should take anywhere between 30-40 minutes.

Heat oil in a deep bottomed pan and saute the onions till translucent. Add the ginger garlic paste and the other ingredients one after another.Add some water and cook the gravy on slow fire till oil separates. Slip in the chicken breasts carefully and let simmer till coated with gravy.

Transfer the chicken along with the thickened gravy into a serving plate and garnish with almonds, raisins and chopped coriander.

Smoke the dish for extra flavor. 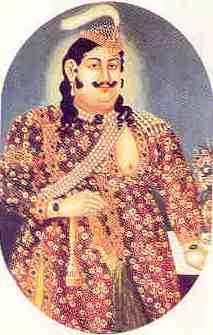 I am taking this royal dish to party with my FF friends. Thank you Angie@TheNoviceGardener for hosting this wonderful event week after week after week. Joining her is a new co-host Anna@AnnaInternational. Come and join me for lots of fun and excitement…