India is dotted with beautiful and exotic hill stations which serve as a perfect getaway from the sweltering heat. Darjeeling which is known as the ‘Queen of hillstations’ sits atop a ridge with a spectacular view of the snow peaks of the mighty Kangchenjunga,the third highest mountain in the world.

It is one of the most popular hill stations of India,famous for it’s six T’s- Tea, Teak,Toy train,Trekking,Tiger hill and Tourism. Having covered most other hill stations of North and South India, Darjeeling had somehow eluded our list. So this time by unanimous choice it was Darjeeling. The nearest airport is Baghdogra which is approximately 2 to 3 hours away from the hill town. The distance between Baghdogra and Darjeeling has to be covered by cab. The journey in itself is an exhilarating experience.

As we drove up the rolling mountains, we could see slopes of beautiful tea gardens, orchids, pines & rhododendrons. There were flowers in every shade and every where.

We stopped by a quaint old Tibetan shop which was selling steaming hot momos. Needless to say they were very delicious.It was by now 5 in the evening and it was getting colder.We had to pull out our jackets and roll up the windows of our car. As our car negotiated along the winding hills, a cloud or fog rose up from the valley and covered the path with a white blanket. For the next 3 to 4 kms there was zero visibility. Our cab driver who was well aware of the hill contours was quite confident but I was shivering with thrill and chill and kept sending silent prayers. The kids were excited though.

I heaved a sigh of relief when we reached our destination. Darjeeling true to what we had heard had a picturesque landscape and a mix of colonial and modern world charm. There are centuries old buildings and houses in Darjeeling that  reflect the traditional British architecture from 1800’s. The hotel where we stayed was originally built for the British Lords and got later rebuilt keeping the old world charm intact. It had a spectacular view of the Himalayas. 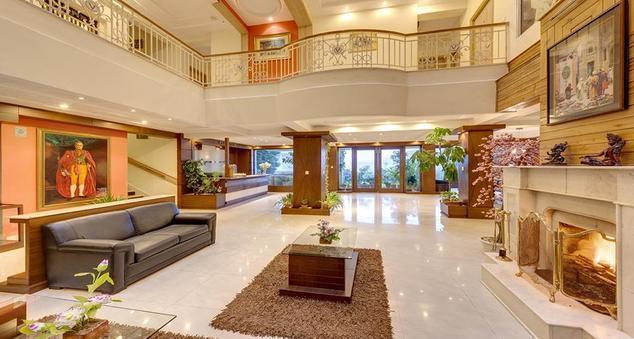 The toy train of Darjeeling Himalayan Railways which runs on a steam engine on a 2 feet narrow gauge track is an engineering marvel. It has been accorded the UNESCO World Heritage status. The train ride was an enjoyable experience as the train honked along its way through several loops and zigzags while negotiating steep gradients.Much to the chagrin of my kids who thought I would fall out of the train, I loved  standing at the doorway of the chugging train breathing in the fresh air and viewing the breath takingly beautiful mystical snow capped mountains.

There is a wonderful Japanese temple built in traditional Japanese architecture,monastery and Peace pagoda in a 10 minute driving distance from the town centre. It is surrounded by 100 year old pine trees, flowers in different hues and a clear view of the Kangchenjunga. You can hear the reverberating and rhythmic sound of a huge drum and the soft hum of the chants coming from the prayer room. Visitors are given a small drum pad and a stick and invited to join the prayers.Photography was not allowed inside the prayer room.

Our visit to the Darjeeeling zoo was an excitingexperience,especially for our animal lover girl. It is home to many endangered species and high altitude Himalayan animals like the Tibetan Wolf, Red Panda, Snow Leopard ,Siberian Tigers, Yaks and many other animals in semi natural habitats. We had to walk up the steep slopes to see the animals in their enclosures but it was well worth the effort.

In close vicinity to the zoo is the Himalayan mountaineering Institute which conducts Adventure, Basic and Advanced Mountaineering courses.

Right outside the zoo were small vendors selling berries and himalayan spices.

All the sightseeing tours,trekking and activities made us all very hungry. Darjeeling cuisine is a mixture of Tibetan,Chinese,Nepalese,Naga and Bengali cuisines. I always love to explore the local food of the places we visit.Momos are the most popular local snack food in Darjeeling. Another very popular Tibetan food is Thukpa. It is  a hot noodle soup mixed with meat, eggs, vegetables etc which is served in a large bowl.Alu Dum is a typical Nepali and Bengali snack which  is prepared by boiling cut potatoes in a thick gravy and mixing dried red chili powder in it along with onion slices, few cloves of garlic, some mustard oil and some red color.Shaphalay is a Tibetan bread which is stuffed with meat.

Our journey downhill to the airport was another exciting experience. We were generously allowed to spend a day at a tea estate by one of my husband’s friends who owned it. It was extremely beautiful. We learnt how tea was plucked,processed and packed. And of course we got to taste the finest and freshest of darjeeling teas.

A surprise visit to Nepal

While driving down the hill, the road acts as the divider between India and Nepal. The road belongs to India and the valleys belong to the neighbouring country Nepal. Our cab driver offered to take us to  Pashupati market in Nepal. There was a small immigration counter where tourists  can register their names and enter Nepal. Yes, it is that easy.

To sum it all Darjeeling is a pristine and picturesque hill station with delicious food and a pleasant climate. Next time you plan to hit the hills to beat the scorching heat,you know where to go.